During his stint as an engineer with multinational corporate giant Broadcom, an epiphany hit Han Liang, currently the CEO of Deepreality Technologies. Liang realized that the graphical user interface of his phone, was poor and its resolution was around 1080 pixels, which was quite low, considering the possibilities with technology at the time. In addition, he noticed that the device also dissipated an undesirably high amount of power. Liang felt that such a resolution was highly inadequate to support graphic-intensive Virtual Reality (VR) applications. In this era, where graphically intensive games powered by VR are really popular, a primary expectation of tech-savvy individuals from smartphone manufacturers is devising gadgets that support high resolution. Thus, device manufacturers are leaving no stone unturned to ensure the devices are aligned with the needs of the millennial generation, which comprises of the largest number of smart device users. 4K resolution is the buzzword that the tech-savvy usually associate with Augmented Reality (AR) and Virtual Reality (VR). This has only further added to the pressure manufacturers are under to churn out products with higher configurations. Liang and his team clearly understood that there was a huge void to be filled, which paved the way for Deepreality Technologies. The organization’s resource pool, comprising video quality experts, soon charted a plan to accomplish improved interfaces best suited for graphics-intensive applications.

The Motivation and the First Taste of Success

Founded in Silicon Valley in 2017, the organization’s solution stack ranges from integrated circuits, hardware systems, to SaaS cloud services. However, the organization’s journey officially kick-started with Liang’s attempt at designing a chip embedded with a superscalar algorithm aimed at improving the quality of a smartphone. The algorithm was first implemented on a FPGA prototype, a platform tailored exclusively for gaming and its potential was demonstrated to several clients. The abilities of the algorithm left a lasting impression on decision makers of myriad enterprises, and eventually, Deepreality Technologies was chosen to be a collaborator of these firms. The positive reviews garnered by the algorithm marked the beginning of many more successes for Deepreality Technologies. Liang mentions that many display drivers available today fail to correct distortions mainly due to the absence of similar algorithms in their devices. Since then, there has been no looking back, and Deepreality has evolved from being an ASIC chip manufacturer to designing electronic systems and cloud-based software platforms.

The Advantages of Superscalar Algorithms

Liang recalls that the success of the superscalar turned out to be a stepping stone to the company’s flagship, the Virtual Reality Processing Unit (VRPU).

Deepreality’s virtual reality interactive platform has been designed to be compatible with a wide spectrum of electronic devices including smartphones, pcs, tablets, and cloud servers

The development of the holistic VRPU solution was preceded by the introduction of a unique chip called the Super Pixel Engine (SPE). The SPE is a display driver coupled with VR algorithms, which has empowered the chip with capabilities such as distortion correction, chromatic aberration correction, and many others. The chip can be seamlessly integrated with LCD and LED display panels as a driver and can significantly amplify their resolution. The driving force behind the rapid amplification is the presence of algorithms.

Apart from the poor resolution that failed to justify the brilliance of modern VR applications, another important challenge was the shortcomings of the Graphics Processing Units (GPUs) of most devices. Liang noticed that while some of these processors lacked in performance, many others dissipated high amounts of power. Liang mentions that even some of the most reputed GPUs known to the masses consume power that’s highly undesirable for a single device. Apart from focusing on resolution, Deepreality Technologies put its best foot forward toward the development of a processing unit that overcomes the performance and power limitations of its predecessors and contemporaries.

The Introduction of VRPU and IPDVR and Their Many Advantages

The motive to resolve the aforementioned predominant challenges plaguing VR, providing a convenient interactive interface and a high-resolution display device for users propelled the development of its innovative products, namely the Virtual Reality Processing Unit (VRPU) as well as Interactive Platform of Deep Virtual Reality (IPDVR).

As mentioned earlier, the VRPU, an extension to the SPE, is the world’s first accelerating chip exclusively tailored for virtual reality and is capable of a 4K resolution output at a 120 Hz frame rate. While the VRPU helps achieve 4K resolution, essential for VR applications, the IPDVR is a general-purpose cloud platform that seamlessly synchronizes information with various interfaces and supports VR classroom, VR tourism, and VR theaters. The best advantage of the VRPU is that it can be coupled with a CPU delivering low performance and increase its resolution to a significantly high magnitude. To be precise, even if the CPU is capable of supporting a resolution of 1080p (Full HD), Deepreality’s GPU can upscale the resolution to 4K Ultra HD resolution. This accomplishment is one of Deepreality Technologies’ greatest triumphs since most competitor processors support a maximum of 1080p (Full HD), which is undesirably low for cutting-edge VR.

Deepreality’s Virtual Reality Interactive Platform has been designed to be compatible with a wide spectrum of electronic devices including smartphones, PCs, tablets, and cloud servers. The platform is also known to support various file types such as text, audio, video, images, and even Android applications.
“Even the regular games today that aren’t really VR-powered demand high resolution and the VRPU was the result of our efforts to meet the expectations of such users,” adds Liang.

Apart from striving towards creating better interfaces to support gaming applications, Deepreality Technologies has also indulged in extensive research and development activities to develop solutions that empower the education sector. The firm is now a trusted partner of one of the most reputed schools in China. The educational institution procured Deepreality’s VRPU to cater to several requirements, predominantly accomplishing a seamless transition to a virtual classroom environment. The adoption of Deepreality’s product has significantly revamped the institution’s approach towards imparting lessons and has enabled seamless virtual communication.

Liang testifies his company’s capabilities in mitigating traditional challenges by tossing another example of a solution deployed to a client quite recently, which was the development of a VR device that supports 4K resolution. Multimedia giant, Nvidia’s most expensive GPU, costing over $1000 has been best suited to support VR devices. However, collaborating with Deepreality helped the client firm procure a high-performance, low-power, and low-cost solution. Liang’s team deployed a Virtual Reality Processing Unit (VRPU) perfectly compatible with the client’s device at an unbelievably low-cost of around $200. Another noteworthy advantage is the employment of VRPU resulted in consumption of just one-tenth of the total power that was otherwise required by Nvidia’s processor. The solution thus delivered bears testimony to Deepreality’s success in mitigating the challenges of the products manufactured by its industry peers and arriving at a relatively more advantageous processor.

The industry veteran adds that enterprises worldwide have just witnessed a glimpse of the power of Artificial Intelligence (AI) and predicts that the technology will reach its pinnacle in the next five years. Thus, Deepreality Technologies looks forward to enhancing its existing solution suite by tapping into the technology to its fullest. After proving its mettle with cutting-edge solutions such as the VRPU and the IPDVR, the company’s resource pool is now engrossed in designing the Graph Computing Processing Unit (GCPU). Liang mentions that this futuristic product will offer several benefits as compared to most sophisticated processors available in the market today. “The introduction of the GCPU will significantly amplify the performance for big data analysis, neural network training, and graph database computation. Integration of the GCPU with cloud data centers will accelerate the computation of AI applications tenfold as compared to the traditional processors,” states Liang, revealing a glimpse of his company’s roadmap.

To enhance the capabilities of its clients, Deepreality Technologies has partnered with several renowned organizations such as Thunder Software Technology and Megvii Technology. The firm leverages the capabilities of these partner organizations to cater to the needs of its clients better. After indulging in a detailed requirement elicitation and analysis sprints, Deepreality Technologies tailors solutions best aligned with the client organization’s long-term goals and the China-based firm involves its partners’ expertise too.
- Nikhil Menon
February 13, 2019 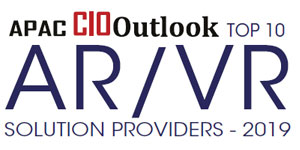